It’s not wrong to make mistakes, if you’re not afraid of changing your mind 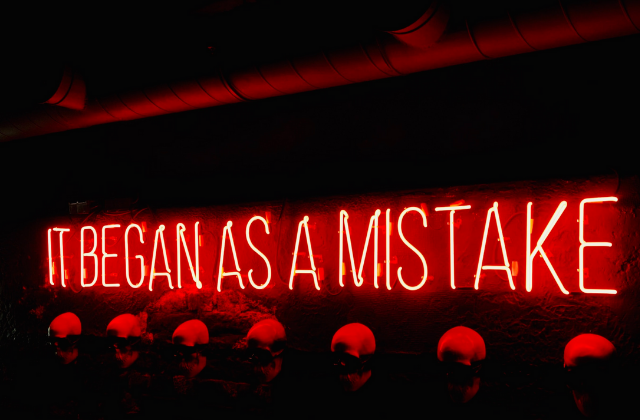 How many times do we change our minds each day? Probably less than we could do, and a lot less than we should do. We don’t change our minds because doing so is tiring. We don’t change idea because we think it means admitting that we “made a mistake” and this adds another layer of fatigue into the mix. When we have to reconsider our position, we feel guilty, as though we have missed the mark. Pyschologist Adam Grant has recently released his book “Think Again”. The author explores the idea of frequently changing your mind, even multiple times in one day.

Why are we biologically and culturally inclined to stay true to our original ideas? Physicist Carlo Rovelli explores a biological explanation in his book, Helgoland:

Most signals don’t travel through our eyes and into our brains: they travel in the opposite direction, from the brain towards our eyes. Our brains expect to see something, based on past experiences and what they know. They paint a picture of what they expect the eyes to see. The only thing that travels from the eyes to the brain is any note of discrepancies compared to what the brain is expecting.

Essentially, we go through life looking at things through the filter of what we expect to see. We’re constantly looking for confirmation that we were right – it helps our brains to save energy. Only after that are we able to receive constant signals and change perspective. It’s about changing the way we look at things. The same goes for listening and understanding our surroundings in general. It’s in our nature to champion consistency and confirm what we already know, as those things make us feel better and safer. So, biologically speaking, we’re not as inclined to look for signals that contradict the picture that we’ve already constructed. In this way, we’re quicker at managing enormous amounts of information.

From a cultural perspective, we could write at length about how our culture treats mistakes. The belief that making a mistake puts you at fault is very present, but difficult to eradicate from society. It’s very subtle. Nobody says it explicitly, but this idea of cause and effect starts when you reach school age.

But how many reasons are there behind our mistakes? How many different stories (and consequences) are there behind contradicting yourself or changing your mind? Mistakes and changing your opinion are two distinct elements in a wide spectrum of options available to us. It’s the quickest and most efficient way to learn. It’s not just about that, though. We wouldn’t be explaining the concept fully if we suggested that you must change your mind in order to learn: that would make it a simple cause and effect.

There’s much more to it than that, and nobody explains it better than the poet Walt Whitman, who famously said:

Our thoughts are so rich and we can see the world in a variety of shades. The only option we have is to constantly change our minds, enriching ourselves with the ideas of those who don’t agree with us. It’s a way of bringing another perspective into the mix.

If change was less scary, if the risk didn’t seem so great, many more things could be experienced.

It’s what anthropologist Mary Catherine Bateson suggested in her book “Composing a life”. Just like Adam Grant, she suggested moving away from reasoning with only two voices – this makes us believe one voice is right and one voice is wrong. Instead, she suggested exploring every topic from three of more points of view. When we listen to more voices, we realize that they all have reasons for existing, that they are different pieces of a puzzle that together can form the richness of reality. They lighten our perception of risk when changing idea, allowing us to live many more lives.

One of the chapters in Grant’s book talks about the “joy of being wrong” and not believing in everything you think. That doesn’t mean that your thoughts aren’t worth as much if you treat them lightly: at the end of the day, every thought is worth considering. And when they are no longer needed, we can let them go.

This article was originally written by our CEO Riccarda Zezza for Alley Oop, Il Sole 24 Ore. To read the original article in Italian, click here.

What if diversity and inclusion went beyond “difference” and “normality”? Let’s be honest: it’s time to take our masks off and be authentic. Our CEO Riccarda Zezza explains more.

END_OF_DOCUMENT_TOKEN_TO_BE_REPLACED

What if money wasn’t the best way to measure our value?

When it comes to measuring value, money is a quick and easy to understand measure. But as Riccarda Zezza explains, it’s a measure, not the value itself.

END_OF_DOCUMENT_TOKEN_TO_BE_REPLACED

What’s left of us, without superficial connections?

As we journey through the pandemic, we realise that conversations and small talk with colleagues in the office was more essential than we first thought.